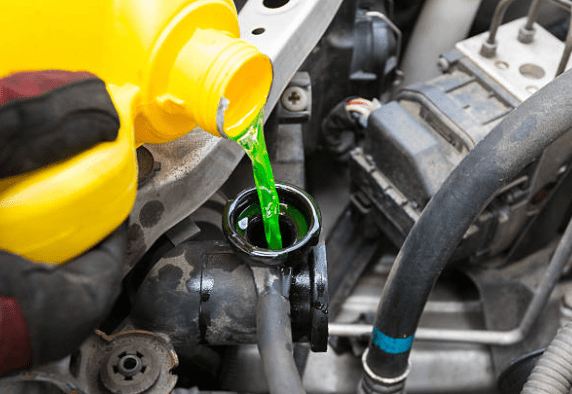 Antifreeze, often referred to as coolant, is a yellowish-green liquid that serves as a lubricant for moving parts in a machine such as a water pump. Coolant treats the water in a radiator and engine from freezing in cold temperatures, but also from boiling over in hot temperatures. Most antifreezes contain the compound ethylene glycol; ethylene glycol, when ingested may cause heart and kidney failure. So what do you do with antifreeze waste?

While there are no federal regulations for the management and disposal of ethylene glycol based antifreeze that does not mean it is not hazardous. Antifreeze is not considered a “solid waste” according to the EPA (United State’s Environmental Protection Agency) and therefore is not regulated or considered a “hazardous waste.” However, some states have specific regulations set for the disposal of antifreeze based solely on its toxicity. For example, the state of Vermont regulates ethylene glycol in solutions greater than 700 parts per million.

How Do You Dispose of Antifreeze?

Where Is There an Antifreeze Landfill?

In most cases, the general public does not have access to a landfill where antifreeze is accepted. Instead, generator’s typically ship their used, unrecyclable antifreeze with a licensed hazardous waste disposal company. Hazardous waste haulers generally have access to disposal facilities that will dispose of chemical solutions not fit for the standard residual waste.

Do You Have Used Antifreeze to Dispose of?

Maine Labpack, Inc. is a licensed hazardous waste disposal company with access to a variety of disposal outlets, including those who accept used antifreeze.

Have antifreeze to dispose of? Contact us today to learn more about disposal options.